Once upon a time, there was a spider. But he wasn’t an ordinary spider. On the contrary, to be precise, he was a spider that was also a God and, moreover, a very witty and spiteful one. And he loved owning stories.

Anansi Boys (2005) by Neil Gaiman, like every book, tells a story. Actually, it would be more precise to claim that it sings a story. The one of Charles-dubbed-“Fat Charlie” Nancy, son of no less than Mr. Nancy a.k.a. Compè Anansi, a spider divinity belonging to the mythological beliefs of West Africa’s populations.

Fat Charlie –who came into the world in Florida and was transplanted in London– is a clumsy and chubby boy with a strong inclination for feeling embarrassed. But, since adorning whatever packet of complexity with a graceful ribbon of adjectives can only result in an oversimplified and wishy-washy operation, it must be said that Fat Charlie is much more than that.

One day, as an incendiary fuse of a monomial (perturbative × catastrophic)2, woof!, his brother Spider, he’d never even heard of, bursts in. Nonchalant, seductive, genetically blessed with deity and capable of on-demand-flaunting a smile «so charming, so cocky, or so twinklingly debonair»: to be clear, the kind of playboy who drinks coffee «dark as night, sweet as sin». And let the narrative plot begin.

The bearing walls of this literary skyscraper are: Rosie, Fat Charlie’s girlfriend and soul devoted to taking care of the Other; Mrs. Noah, Rosie’s mother and a woman with a wrinkled but incline-to-inner-gloating heart; Daisy, a strong-willed and upstanding detective whose song says «evildoers beware!»; and, dulcis in fundo, Grahame Coats, Fat Charlie’s boss at the Grahame Coats Agency, and more of a weasel than a man.

Pirouetted among all its countless corridors, with instants of affliction, perdition, and incredulity, Fat Charlie finds himself wandering in symbolic timeless places, where the B side of reality seems dunk in a «technicolor Ozness» and where the oddest happenings drip an aqueous essence which is pure Gaiman.

«Walking the path along the edge of the mountains at the beginning of the world (it’s only the mountains at the end of the world if you’re coming from the other direction) reality seemed strange and strained. These mountains and their caves are made from the stuff of the oldest stories (this was long before human people, of course; whatever made you imagine that people were the first things to tell stories?) and stepping off the path, into the cave, Fat Charlie felt as if he were walking into someone else’s reality entirely. The cave was deep; its floor was splashed white with bird droppings. There were feathers on the cave floor too, and, here and there, like a desiccated and abandoned feather duster, was the corpse of a bird, flattened and dried.
At the back of the cave, nothing but darkness.»

While reading the pages of this book, the reader is sometimes caught by contagious dizziness, in other times her/his eyesight is fogged by naïve myopia and in yet others, she/he inhales an atmosphere overflowing with amnesia (never ever the fine dust of the story becomes rarefied) and overexposed duplicity.

«Fat Charlie saw one thing with his eyes, and he saw something else with his mind, and in the gulf between the two things, madness waited.»

I hope you’ll forgive who writes for not unrolling the plot of this opera more than this. Letting ourselves be wrapped and surprised by its adventures and scents is an immersive experience only when full-frame lived, and it would be sinful to crack the fragile matter of which it is made. Rather, by going through the dioramas of this matter, we should let songs resonate, songs whose oscillatory frequencies dance in the balance among worlds that are, at the same time, dreams and the connective tissue of the universe. And, as you’ve already guessed, this tissue is made of a luminescent spider web.

In the end, as it happens for all stories, let the Ouverture of this one be interpreted by Anansi while flaunting his elegant green fedora hat, and let’s dance.✎

Note on the author: Neil Richard MacKinnon Gaiman, class of 1960, is a British multifaceted and award-winning writer who certainly does not need presentation frames. Following American Gods, also Anansi Boys will soon debut on the screen in a miniseries produced by Amazon Studios. Gaiman himself is involved in its writing.

[The Italian version of this review can be found here.] 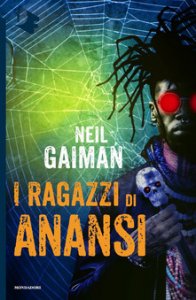 «It begins, as most things begin, with a song.
In the beginning, after all, were the words, and they came with a tune. That was how the world was made, how the void was divided, how the lands and the stars and the dreams and the little gods and the animals, how all of them came into the world.
They were sung.
The great beasts were sung into existence, after the Singer had done with the planets and the hills and the trees and the oceans and the lesser beasts. The cliffs that bound existence were sung, and the hunting grounds, and the dark.
Songs remain. They last. The right song can turn an emperor into a laughingstock, can bring down dynasties. A song can last long after the events and the people in it are dust and dreams and gone. That’s the power of songs.» 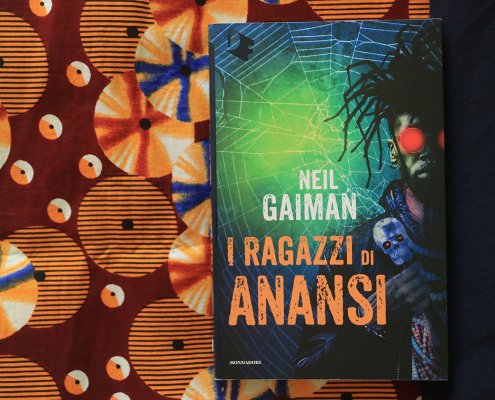 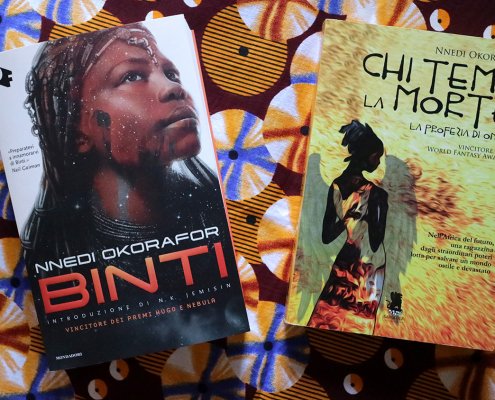